We were on our way to look at some land in Laos to lease for project I am working on.  Let’s just say that it is a bit of land, and unbelievably cheap. Thanks to the Communists, I guess. Before we went to have a look, we had to stop to see the village chief.  I like that.  He was noble looking enough and smiled.  His wife served the food while we sat on wobbly plastic chairs on a cement floor, sort of like a porch. The kitchen and bathroom (the outhouse) are always outside. There were pigs, goats and chickens running around.  There was one pig in a pit next to the eating area, where food was prepared.   I guess he was dinner for next week.  There was a goat watching me, front legs on the upper step, looking ready to charge.  I kicked a chicken out from under the table like it was a cat.

I like these kind of adventures. Its more fun than hanging out in a fancy restaurant in New York City with a bunch of Republicans making a deal. But when his wife put the bowl of chicken parts in front of me I would rather have been anywhere else. I try my best to eat whats placed in front of me in situations like this, but I have gagged on chicken feet in the past. Dog, horse, monkey, bugs, live fish; I have tried it all.  To make it worse, there was a chicken head just under the foot, split in half as if a viking warrior had come down with a blow of his sword and split his skull cleanly in half. Oh, stop whining.  You just have to read it.  I had to eat it.

The toes are the worst part, so i decided to start from the ankle and work my way down. Jesus, Mary, and St. Joseph, pray for me.  Help me get through this day and I will go to church again.  Chicken feet are like chewing on someone’s nose. I gnawed down a way, then couldn’t do any more.  The Chief watched me, as if it were a test of manhood.  I hope I passed. The Thai people looked in admiration.  (For the record, I never eat fast food or factory food. They think Falangs can only eat McDonalds and KFC, and can’t handle spicy food.) I found out later, they had brought some Thai food along, just in case I couldn’t eat.  The sticky rice was pretty good, but everyone reached in with one hand, and ate it with the other.  I watched carefully so I wouldn’t use the wrong hand.

Just as I thought I was finished, the chief’s wife brought out a bottle of something that looked fierce, and I suspected was some sort of Lao white lightning, but it was red rather than clear. She poured some in a glass, handed it to the person on her left who drank it.  She refilled it, working her way around the group, same glass. That shouldn’t bother anyone.  No germs could survive. The drinkers all tossed it back, turned red, started to sweat, and then reached for a bottle of water.  The guy who was two over from me tossed his back like a pro, and I asked, him, what it tasted like. “Gasoline.” 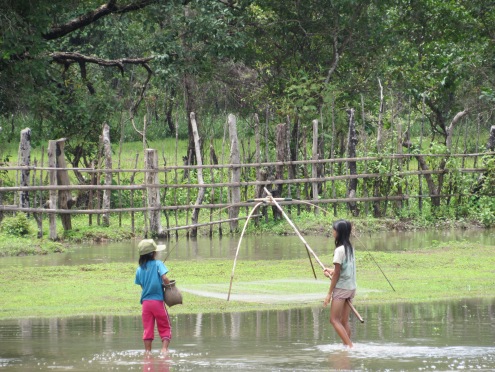 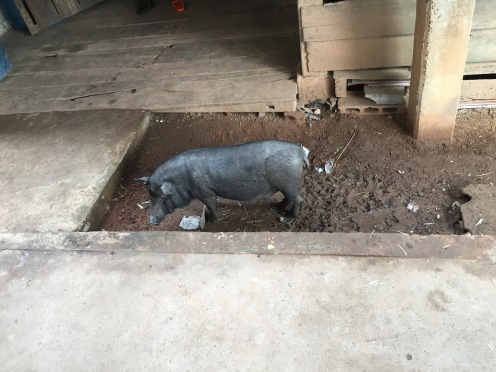 Now, everyone who knows me well who reads this knows I don’t drink and haven’t for a long time.  Those who are the Facebook friends from days long ago might think, “That makes sense.  He shouldn’t.” I wasn’t going to drink that stuff, custom or no.  I looked at the Thai person in charge, and signaled, no way.  He waived the chief’s wife off, and I was saved.  I escaped, off by myself, as they started the second time around with the bottle.  I  went past a pig or two on the way to the outhouse, which I have to admit was about as clean as you could get an outhouse.  I walked around the village a bit, stared at by kids who had likely not seen a white man.  I liked it. I always do.

After a bit, the whole entourage came out, in a wagon pulled by a rice plow, everyone standing inside.  It was like a hay ride, but the wagon was small and I had no idea what was in it last. I walked behind the wagon for as far as I could.  When we got to the point where we turned to head through the rice paddies before heading up into the jungle, I climbed into the back.  That didn’t last long, as the wagon got stuck in the mud, and everyone had to get out and walk, me in my new sneakers, no hiking boots.

Well, we saw what we needed to see.  Life is just one adventure after another.

4 thoughts on “One More Day in Laos”