For my friends who worried that I would, I did; someone stole my heart.  When I leave, I will carry a heavy heart until I can come back.  I will miss her, and I know she will miss me.  I see her every day now.

When I went into the mini-mart yesterday in Phnom Penh, the two women who work there greeted me as if I have been coming in for years instead of days.  I showed the wounds on my leg from a bicycle accident bleeding into my shoe.  One said they had nothing for it, but said, “Gib me five dolla. I get.”  She told me to sit down at the table in front of the store, jumped on her motorbike, and was back in ten minutes with some peroxide, dressing, and the change. While I waited outside, the girl who stole my heart came by. She sat at the table across from me.  Her chin just cleared the table, and through her black sullen eyes, stared at me.  As I talked on the phone, she waited.  I hung up. She asked for money before. This time, she sat there with her chin on the table and sad eyes looking up at me. I was not sure how much is an appeal to me, but I can tell she knows I am an easy mark. I don’t like to give money to the kids, as there is usually an older person, like a pimp with a team of beggars, watching, who will take it, like Fagin in Oliver Twist, straight out of a Dickens novel.  I went into the store, and asked the girl behind the counter to tell the girl to get some food, and I would pay for it.  She took a Coke and instant soup.  I took the Coke away, and got her some orange juice.  She grabbed some candy, which I took away, and replaced it with some fruit.  She started for the hot water for her instant soup, and I said, “Hey!”  “Thank you, John,” she whispered. Her voice is raspy.  She looked up at me, and I know she is grateful, but sad, living a hard life, so unfair for a girl of ten or so.

She waits for me in front of the hotel. Some say she knows I am a soft touch.  So what?  I wonder if she knows I care for her, about her. I wish there were a way I could take her home.  If I were married and younger, I might try.  Although only ten or so, she has seen too much. I have seen how she is treated by some of the other kids.  A few tuk-tuk drivers mind the street and try to watch out for kids like her. She would be beautiful if she were clean and could smile. Her hair is matted, but long and black.  I lifted her lip and saw her back teeth are black and rotted.  I wish I could find a way to get her some teeth.   She has no shoes and her feet are splayed out as if she has never worn them.  When I ask her questions, she lies.  I don’t care.  I know I will see her later today. She will find me. I hope she is not abused. The people on the street see everything. There are vendors, waitresses, bar girls.  And they all talk.  Everyone knows I have a soft spot for her.  I thought they might not like it, but the street people treat me well.  Better, I think, because they see me help her. The police don’t help kids like her. They only help themselves.

There was a cop shaking down street vendors today. I said to one of the tuk-tuk drivers that I don’t like the police.  Sitting in the back of his tuk-tuk, he told me that the cops are bad here, take money.  I said, “In America, same-same, but different.”  We are pals now.

At breakfast across the street from the mini-mart, I ask the waitress about the kids on the street. She points out the good ones, the boy who sells papers to get money for school, a beautiful girl of 16 who sells books and seduces older men then blackmails them. She points out the one’s who sniff glue, and to stay away from them.  She said my girl sleeps under food carts or on the river. Bob said he has seen her over the years, and she just started wearing a shirt.

Often in the afternoon, I go to the Cadillac Bar and Grill. Kenny, a Jewish guy from Texas, owns it, and rents the building from a cop.  He has a contract, which is likely useless as it can’t be enforced and could be told to get out with no recourse.  The cops like to have expats as tenants, as the rent will be paid. The owner is happy until a better deal comes along. Kenny is a good guy for a liberal, but like most liberal Jews, confuses me.  I can’t understand how they can vote for the Arab in the white house. The usual crowd showed up. There was one guy I had not seen before, Luca. They drank beer and passed a joint around as we sat on the sidewalk tables.  Luca, the Italian, offered me a hit. As I refused, he said I didn’t look like a guy who would smoke it. I guess not. Luca asked about why I don’t drink.  I just said, some guys should not, and I am one of them. He said he wants to go to AA, but doesn’t want to quit. “Neither do most of the other people who go there for the first time.”  He said he needs something to do, and drinking fills his time. As it is, he said, he is usually drunk or loaded by this time in the afternoon.  I asked what he is doing here, and he told me he is trying to open a flight simulator.  He is a pilot from a European airline, furloughed, and paid not to work.  He will lose his pay to not work, if he works.  That makes sense.  A bankrupt company, a bankrupt airline from a bankrupt country paying some guy to sit on his ass and drink and smoke, while the Cambodians work their asses off just to eat.   He came to Cambodia to open a store with the flight simulator, thinking he wouldn’t get caught, thus losing his free money.  It seems the Cambodian government is leery of the idea of a flight simulator, so he does nothing, but drink and smoke his free money away.  Luca had another drink, smoked a bit more dope then got on his bicycle and pedaled into the mad traffic where I fear to cross the street.  Luca thinks he deserves all this, and does not see the irony that surrounds him. I hope he doesn’t fly again.  I won’t be getting his airline.

I went on a bike ride yesterday with a touring group.  There were 11 students traveling for the summer, and me, old enough to be their grandfather. No matter.  They were mostly unfit, pale-white, and could not keep up.  One showed up with fresh tattoos and a hangover. I am sure her parents will be pleased with the fresh ink.  The first two kilometers were in the city, then we got to the ferry boat to the island.

The ride was rural countryside, small villages, houses on stilts, mud, water buffalo, small children chasing after the bikes yelling hello.   I stopped to take pictures and gave them a few cents.   One tried doing an Elvis impersonation, “Thank you, thank you very much.” What fun!

We stopped under a tree to wait for the slackers, which was most of them.  I asked one woman where they were going next.

“To an elephant rehab.”

I asked how you rehab an elephant.

“Wash them, walk them and feed them.”

When I asked if you ride them, she looked at me with scornful disdain. “We are against trekking.”  You can’t seem to get away from entitled, arrogant leftist Americans imposing their ideas on others. And only 19.

The bike tour stopped at a silk weaver.  All these tours have a deal with a place or two.  You stop for some fruit and a drink, and they take you to a vendor, in this case a silk weaver, and hope you buy something. Knowing I was older, and the eleven kids likely would not buy, the woman who was the silk weaver went after me.  She showed me around.  Her children were working the weaves, learning something useful. She was proud of them. She would be arrested in the U.S. for child abuse. 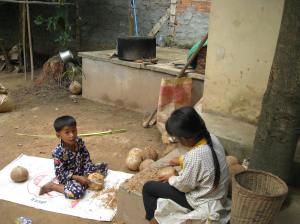 She asked if I was married or had a girl friend.  I said no, which left her a bit confused, what with no one to buy for.  I said I needed a tablecloth for my boat, and she showed me a beautiful silk cloth I bought for $65 that she said took two weeks for her to make.  She was only around 40, and I asked her how she learned to weave so beautifully. 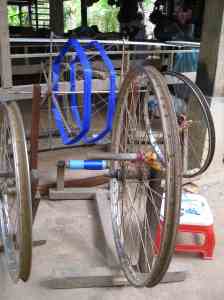 “An old woman taught me.”  Then, with some prodding, she told me that everyone on this island was killed by the Khmer Rouge, but for a few who hid.  They are so matter-of-fact about it.  They still suffer from it in many ways.

We got on our bikes and rode off.  By this point, I was staying away from most of these kids.  There was one, a young man, whom I chatted with because his English was not littered with “it was like, oh, my God.”

I asked him his major.  “Mechanical engineering.”  I told him at least one guy was working on a useful degree and asked why he was on the trip.  Seems he was trying to get into the pretty blond’s knickers, but to no avail.

At least one guy is here for a good reason.  We talked about science and engineering, and I told him about my ideas of fail and fail fast, that he should move on, but enjoy the rest of the trip without her.

We got to a restaurant for lunch.  Most were vegetarians, of course, and a pain in the ass about it.  One of the young women went on an on about her period while I was trying to eat, as if that demonstrated how liberated she was.  She then went on about how unfair it was that she could not use student loan money for this trip with her friends, and that she shouldn’t have to pay it back anyway.  I asked why, and she said because they are the future. God help us all, I thought.

No wonder I love it here.  No one expects anything from the government, but to be left alone, for them to stay out of the way.  No, they are not left alone, but they know the consequences of an activist government.  These poor people have more sense than we do, as they work for their daily bread.