Four-Plus One Streams of Wealth: Stream 3 and 4, Create The Great Middle Class While Plus 1 Provides Little Benefit

The British Empire can safely lay claim to be the source of the industrial revolution. It’s easy to trace the development of useful science from Italy where Galileo showed those who would listen that the earth was not the center of the universe, to Northern Europe and Tycho Brahe, after the Catholics chased good science from Italy. England picked it up, and Isaac Newton, born the year Galileo died, discovered proper physics models which began to have an effect on how people made stuff and how they lived their lives. It is worthy of note that it only took a generation or two to get from flawed but ingrained and useless models of physics to Isaac Newton’s three laws of motion, and applying them in an industrial revolution a short time later.

Unlike most revolutions, no one intended to start this one. A few clever folks invented some machines, the most important likely the steam engine principally used to drive all kinds of other machines by turning a shaft and hooking up pumps, machine tools and soon, generators, all to do more work faster. More machines were invented, and manufactured, needing more and more technicians and artisans and workers. Certainly there were a few greedy folks toward the top, but there was a lot more real work being done, technology being developed by clever people at rapid rates, and a lot of people learning skills and trades, as well as a few people being exploited. Machines alone were no cure for man’s inhumanity to his fellow man, but there can be no argument that the human condition has improved greatly by the mechanical artisan and hammer and tongs under the umbrella of capitalism.

Kings discovered it would be cool to run a fountain or two, while others did more useful things. Before long, the engines needed to be more efficient and lighter, as they were being attached to other devices such as paddle wheels and locomotives, mining machines, making steel then building long-span bridges. Factories were needed and built, and people got jobs. The workers were sometimes exploited, as factories became another place for man to demonstrate inhumanity to his fellow man, but the better side of man came out as time progressed. Yes, we still exploit our fellow man. I have seen it, but where it is a matter of course, there is no sustainable middle class.

Up until the Revolution, wealth for the masses, what there was of it, had been based on grow-and-cut, and grow-and-kill, Wealth Streams 1 and 2. These were short economic chains, with most growing being done in the outlying regions of a village, and selling in the village.

Families were well suited to these first two streams, grow and cut and grow and kill. When grow-and-cut found more demand in the days before mechanization, slaves often became the source of labor. It is interesting, but another matter, that slave labor impeded industrial progress in the U.S. The North employed machines while in the South, slave labor was so ingrained in the culture, mechanization was avoided. The South would have been called “third world” if there had been such a distinction.

As the industrial revolution progressed, a middle class developed. Industry is the source of a great middle class. I argue that without it, there will be no sustainable middle class. Those speaking in terms of a post-industrial society are delusional. A middle class is critical to a free democratic society. Putting it at risk puts the country at risk.

Drill and pump, the 3rd Stream

As industry developed, fuel was needed. Coal and wood had been the primary source for powering early steam engines in England.

The atmospheric engine invented by Thomas Newcomen might have been about 20 horsepower, and burned up an acre of English trees in a day. At that rate, England was stripped of trees in short order. It didn’t take long for clever people to make more efficient engines and find alternate sources of fuel. Clever Americans now got in the game.

Robert Fulton mounted a steam engine onto a boat in New York. It was the first power plant mounted onto a moveable platform, providing the ability to transport goods upstream.

Coal and wood were still the primary source of fuel until someone in Pennsylvania discovered that drilling a hole in the ground provided better fuel with less of a mess. Oil, it was discovered, could be refined into all kinds of beneficial products, and the third economic stream, drill a hole in the ground and refine the product, was developed. This third stream of wealth was longer than the first two. It also required capital to drill, transport, and refine. This was different than growing, cutting, and transporting to the market in town. The wealth it created was substantial. A few people became extremely wealthy, but a lot more found employment doing real value added work, providing economic hope. The third stream of wealth was not really independent of the fourth. Each needed the other.

Mine and Smelt, The 4th Stream

Mining and smelting, I think, can be credited as the source of the great American middle class. It is the longest economic chain, starting at a mine, then smelt to billets, to steel shapes, to suppliers of parts for autos, aircraft, houses and everything in between. It turned the United States into a world power. In 1938, the U.S. had the 18th most powerful military, right behind Portugal. Few thought the U.S. could become a mighty military force in so few years.

Within a short time, the most powerful military came from the greatest manufacturing powerhouse the world had ever seen. The U.S. economy grew at a rapid rate, employing millions of people, and bringing them out of poverty to the great middle class.

The fact is that the American middle class grew from the ability to work in factories, and in no other way.

Now, the question becomes, how to we preserve a middle class? I submit that:

My father, like so many others, left a farm in early 1942 to join the Navy, fought in the war, then headed for General Electric making aircraft engines in Massachusetts. He had no extraordinary skills, just willingness, and culture of hard work learned on the farm, and a knowledge of poverty that he had no interest in repeating. He grew confident in GE. It would always be there, that hard work would sustain him, and provide for his large family. It was the American way; from farm to fighter to factory. 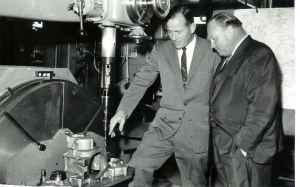 The Plus 1 Wealth Stream

Next to my MacBook Air in the hotel where I write, I have two IPhones, and a new IPad (I gave away the old one.) I bought my first Mac in 1985 and have likely had 25 since then. (I have never bought a machine that runs the MicroSuck operating system.) One of the IPhones is an IPhone 6. I bought it unlocked from Best Buy for about $800. Kids all over America are addicted to them at the expense of books, but that’s another matter.

$Billions are spent on these gadgets. I submit that the hardware might be worth $200 including the labor to put it together. It is cheap labor, mostly pick-and-place, nothing clever required. The workers are paid barely above slave labor, none of it in the USA. The balance of my $800 went to the clever folks who invented and developed the IPhone. Unlike machines from Wealth Streams 3 and 4, such gadgets like IPhones and IPads have a very short economic chain with most of the money remaining at the top of the stream. I don’t care if people get rich. Good for them. However, we shouldn’t be delusional about the contribution to sustaining a middle class; these machines are clever, but don’t help the middle class.

As far as tech sector being a jobs engine is concerned, reputation is not the reality. As advertised, technology creates great wealth; that wealth, however is distributed among a small slice of society. There is a bright green line between those who make millions and the remaining minions. Put simply, the tech sector can create wealth without creating a lot of work. Nishant Bhajaria

Delusional politicians, however, think that hi-tech will save their cities. Pittsburgh touts its resurgence as a center of hi-tech. How’s that working out for ya, folks from US Steel? The government thinks they can go to school for a few weeks, then get a job in hi-tech.

As I listen to Fox News here in the hotel, the Senate is debating a trade bill. The usual approach is for Democrats to want to raise taxes, Republicans to cut them. I argue for another approach.

IPhones and IPads will never be made in the U.S. The labor is cheap and is not creating a middle class. These jobs are the equivalent of working at McDonalds. They belong outside the U.S. providing jobs for those trying to extricate themselves from the 3rd world.

Because of the concentration of wealth from these gadgets, they should be taxed accordingly at the point of sale.

Apple is a great company and locates its headquarters fort tax purposes outside the U.S. I don’t blame them. The U.S. Government taxes companies at the highest rates in the world and has chased a lot of good companies out. It isn’t cheap labor as much as high taxes that keeps good companies out. Apple has billions in cash, but provides few jobs for the middle class, especially in proportion to their revenue. Most of their products do nothing for productivity unless you consider the ability for girls and boys to remain in touch on WhatsApp as important.

Tax these gadgets accordingly at the point of sale. Apple can leave their chest of gold wherever they want.

If taxed IPhones are too expensive for Dad to buy one for each of his three kids, good. They can read a book.

Take, for example, a company in the automotive supply chain that produces starter motors. The raw material is purchased from copper and wire suppliers, steel mills for sheet metal, forges, casting houses, etc. They sell to GM, Ford, Honda, and BMW. The pay no U.S. federal income tax. GM, the last company in the stream, sells the starter motor to the consumer as part of the automobile. As a result of its position. last in the chain, GM pays a tax on its profit.

Exxon, on the other hand, drills and refines. For the most part, Exxon sells to the consumer at the pump, so would be taxed.

Think about this just like any stream. Diverting water (capital) from the stream at multiple points along its path reduces that which is available from productive activity along the stream. Leave capital in the stream, especially if it performs the critical task of creating and sustaining a middle class through capitalism, which is far more productive than any government activity.

What would happen? Companies who have moved off shore would be tripping over themselves to build factories in the U.S. The demand for labor would skyrocket, securing the place for millions in good middle class jobs that require skill and training for making things.

Tax revenue would increase because good American workers would be collecting paychecks by working, not from government, paying taxes on earnings instead of collecting government checks.

One thought on “Four-Plus One Streams of Wealth: Stream 3 and 4”